Welcome to the Member Login Area 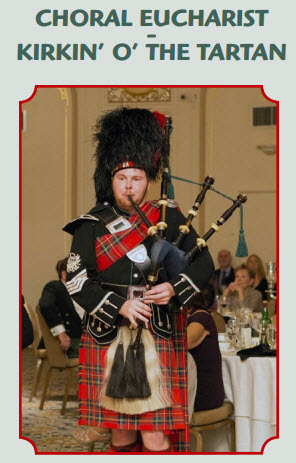 Kirkin' O' The Tartan
Event Description:
The pageantry of the Highlands comes to Grace Cathedral for St. Andrew’s Day as the Saint Andrew’s Society of San Francisco joins the Sunday procession at the cathedral for the First Annual Kirkin’ O’ the Tartan. St. Andrew's Society of San Francisco and BABC members, accompanied by Highland pipes, will pay tribute to their Scottish ancestors who struggled to preserve their liberties and religious freedoms.

History
Saint Andrew, an Apostle and brother of Saint Peter, was declared the Patron Saint of Scotland in 1320, and his example of charity and kindness lead Scottish settlers in North America to organize benevolent societies. The North American tradition of “kirkin” (Kirk being the Scots word for “church,” or blessing) the tartan, originated with Saint Andrew’s Society of Washington D.C., and has now spread throughout the U.S. and Canada. The original Kirkin’ was held at the National Cathedral in Washington, D.C., on April 27, 1941, to raise funds for British war relief. Society members and friends, led by a lone piper, will join the procession into the cathedral. A ceremony to bless the tartans and the families represented by the cloth follows the homily. After the recessional to the north side of the cathedral, all are welcome to join for light refreshments on the plaza
Location:
Grace Cathedral
1100 California Street
San Francisco, CA 94108
(At the corner of California and Taylor Streets on Nob Hill in San Francisco)

Any cookies that may not be particularly necessary for the website to function and is used specifically to collect user personal data via analytics, ads, other embedded contents are termed as non-necessary cookies. It is mandatory to procure user consent prior to running these cookies on your website.